Horror in the West

Howdy, y’all! If you’re in the mood for a poorly written review of a comic book , you’re in luck!

This post will be even better if you like striking images of undead cowboys, stories of possessed townsfolk hungry for blood, and depictions of horses getting eaten by fucked up alien creatures. So let’s saddle up and mosey along, partner! (it’s nothing but cowboy puns from here on out…sorry)

Waaay back in March, I was lucky enough to head over to the Toronto Comic Convention, which was fucking awesome for someone that’s into comic books, toys, pop culture, and all 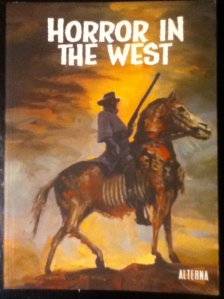 that good stuff. I had never been to a bigger city Comic Con before, so I didn’t know what to expect, and I have to admit I was not prepared for what was in store. I’d say I spent most of my time in Artist’s Alley, where local artists sell their, well, art. One of the tables was manned by Toronto area artist Brian Evinou, where he was trying to sell a comic book trade in which he had illustrated one of the stories.

Published by Alterna Comics, Horror in the West (Recommended for Ages 17+ mind you) boasts itself as: “a horror anthology featuring eleven stories that combine the mysticism of the Old West with demons, zombies, aliens, and blood-curdling storytelling.” Being totally honest, I didn’t expect much from this independent comic compilation because, frankly, I don’t have many independent books that I’ve been impressed by- what drew me in was the cover art. The cover features a demonic looking figure in cowboy attire (complete with spurs on the boots) sitting atop a ravaged, zombie-esque looking horse. The back cover features a similar image, with the horse and rider now reduced mostly to bones.

As a horror fan, but an even bigger western fan, this was too interesting looking to pass up- the $10 price tag also helped to sweeten the deal.

As it turns out, the stories and art held within are both entertaining and captivating. The book opens with Star Calf, a story about an alien that crash lands on Earth, possesses the mind of a rancher, and then goes on a terrible killing spree. The alien grows to unthinkable size, reproduces, and then devours everything in its path- varmints, cattle, people, and entire towns are no match for the hunger of this terrifying extraterrestrial gang.

Under the Mountain is a beautifully illustrated tale of a horrible discovery found deep within a mountain. This undead adventure follows a bounty hunter as he struggles to find out what happened to a group of men that were lost while blasting a mountain for a new railroad being built through Indian territory. It touches on the Reptilian conspiracy, but the twist that it took place in the old west was fantastic. It also hints briefly on an idea found in countless Native American myths, that evil spirits and creatures were banished to lakes or mountains by powerful shaman- tampering with these locations is enough to release the horrible entities to wreck havoc once again.

Brother’s Keeper, illustrated by Evinou, followed two brother’s who, after a job-turned-sour and a double cross, were forced to shoot up a whole damn town. In the ensuing melee,

one of the brothers get shot, so the pair are forced to ride off and look for help for the wounded cowboy. After hours of hard riding, they encounter a farm house in the middle of a dry wasteland. What happens next you’ll just have to see for yourself, but believe me when I say that the physical depiction of Death is unlike any that I’ve seen before. It fits perfectly in this collection of stories.

Probably the most interesting twist in a book chock-full of crazy turns was in El Tigre. This tragedy tells of a demonic female bounty hunter who kills her bounties by eating their souls (no big deal when the men she’s chasing are wanted “Dead or Alive” right?). She’s on the hunt for a mysterious criminal named Daniel, who ends up kidnapping a preachers daughter. Knowing full well that El Tigre will be hot on his trail, he sets a trap for our other-worldly female protagonist- he puts a demon inside the kidnapped girls, uh… lady parts, that springs on El Tigre when she tries to rescue the girl. I couldn’t stop laughing at 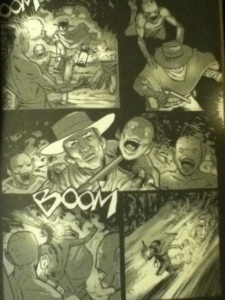 how bizarre the notion of this trap was, and was a bit surprised that I’ve never seen it anywhere else before.

A few of the stories could have been left out in place of extending some of the others (I really want some closure with Star Calf), but overall this is a great addition to any collection, especially if you are a fan of the Horror or Western genres. I’m hoping for a second volume to tie up some loose ends on a few stories (The Amulet especially), so in the meantime I’ll keep my copy of Horror in the West close at hand, ready to draw whenever high noon rolls around (sorry! Last one, I promise).