Are you sick of zombie games? I sure as heck hope not because there are about a million more in development and new titles get released every minute (or so it would fucking seem). With the success of games like Resident Evil 6, Left 4 Dead, Dead Island, and the always fun Undead Redemption port, it was only matter of time before zombie games started to shamble over to our cell phones… 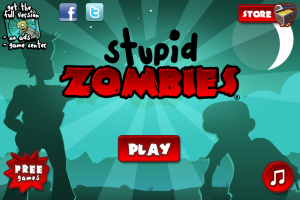 I found a pretty cool app/game the other day called Stupid Zombies and I have to admit, I’m pretty much addicted to it. Published by GameResort, SZ puts you in the shoes of (what else) a zombie hunter who had only one thing in mind: kill all the flesh eaters that you possibly can.

Side note: your character looks just like Ash from the Evil Dead/Army of Darkness flicks

and comic books and your sole weapon is a bad ass shotgun. There’s gotta be a lawsuit in here somewhere…

So what makes this game so fun? The God damn carnage! Actually, my favorite part is the fact that you’re invincible; you don’t need to worry about save points or health meters in this game- your sole job is to fuck up zombies with ricocheting bullets. This title plays a lot like Angry Birds in that in order to pass each level, you have to kill all the enemies (and the fewer bullets used, the better). You pass each level with a star ranking (one, two, or three) and in order to achieve the three stars, you need to do as much damage as possible with each bullet.

Did I mention you get to kill zombies?

The bullets do a shit load of damage and it’s just so rewarding to violently fuck up these undead jerks up. Some levels have exploding barrels, some have steel blocks that, when shot, cannon in to anything in their path. It’s just such a fun, addicting time because, on top of the levels being pretty damn easy, there’s a lot of creative ways to kill the infected opponents.

The music is pretty great too; the title is this marching loop of a tune that could easily find its way to the soundtrack of any horror themed game. The sound effects are also top notch quality.

So to sum things up, Stupid Zombies is basically Angry Birds, except with guns and undead enemies instead of pigs. If you have a smart phone or any type of touch screen device, download this FREE game immediately!

Like this article? Fucking hate it? Let Mike know in the comments section below!