Judge Dredd was one of the first comic book series that I really loved as a kid (besides Mars Attacks!, Silver Surfer, and Guardians of the Galaxy). I think what drew me in the most was the fact that everyone in the comic was fucking terrified of him; there are a lot of Oh-FUCK-it’s-Judge-Dredd moments in the series.

I also loved that Dredd was always looking out for the little guy, which is what most superheros do, but Dredd is different. It’s his job to protect the average Joe, and for the most part he fucking excelled. And can you argue with that uniform of his? Hell no. He’s got a badass motorcycle and even crazier guns- this guy is the universes ultimate lawman.

I decided to go through my collection and list some of the best match-ups Dredd has faced in the world of comics.

On paper, this has to be one of the most equal, if not coolest, match-ups in the comic book universe. On the one hand, you have Batman: self-taught vigilante, insane work ethic, compassionate, intelligent, cunning, relentless. Then there’s Dredd: all of the characteristics Batman has, except he’s a clone (no My-Parents-We’re-Killed-Boo-Hoo complex) and he has a badge. In fact, Dredd should hate Batman, a guy that takes matters in to his own hands when it comes to the law.

Let’s face it, they both have a boner for justice. Both have extreme physical strength and a handful of kick-ass weapons, vehicles and gadgets… but who the heck would win in a fight? Lucky for us, DC commissioned Alan Grant (Robo-Hunter, Judge Dredd, Lobo – not to be confused with the paleontologist from Jurassic Park) and John Wagner (Strontium Dog, The Bogie Man) to write a story and decide once and for all. And guess what? Batman gets his ass beat.

Dredd lays the smack down on Bats panel after panel- he basically kills him in the epic 30+ panel fight. Fortunately for Batman, Dredd saves his life at the last minute (Bats is about to fall from a train and Dredd reaches down and pulls him up in one heck of a close call). It turns out Dredd was only trying to save Batman (go figure) because, being from the future and all, Dredd knew that the caped crusader would have died that night in an explosion stemming from a plot by everyone’s favorite ventriloquist dummy, Scarface. Dredd’s reasoning behind the epic fight was that he “had to keep you occupied”… I guess stepping out for coffee wasn’t much of an option.

Early on in the series, Judge Dredd literally has to fight nature. In issue No. 4 of Eagle Comics’ Judge Dredd saga, a strange mutant that called himself Father Earth gathered up his followers, mutant and non-mutant alike, and hatched a diabolical plan to destroy Mega-City One. Basically, he’s pissed that man has covered “this good Earth with concrete and steel” and blames the whole “apocalypse/cursed Earth/atomic desert” thing on everyone inside the city. 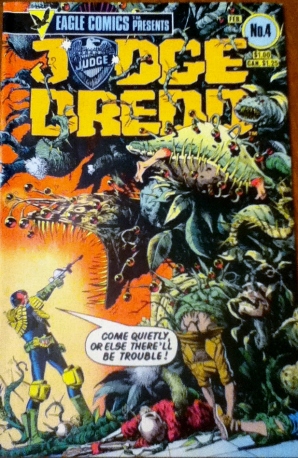 His plan was simple: detonate a bomb in one of the city’s main Power Towers, which are powered by fucking lava (no one saw a problem with this apparently), and create a gigantic volcano in the middle of the metropolis. Here’s where it gets crazy: he fucking succeeds with his plan. Bombs go off and entire sections of Mega-City One are swept away in a sea of molten rock. Dredd can’t believe it, only just escaping from a channel of lava himself.

But that wasn’t Father Earth’s only plan. Mega-City One has a botanical garden, and like any futuristic society, it has an entire section dedicated to “Alien Carnivorous Plants” (why the hell not, right?). So of course all the man-eating plants escape and start eating everyone, including Father Earth, although he kind of accepts his fate and welcomes his death, as he believe he’s being honored by Mother Nature. Dredd ends the issue with one of his signature corny lines: “You can’t be more at one with nature than that!”

Side Note: the thing I like most about this issue, besides the art, is that nothing is fucking resolved at all. The lava is stopped, sure, but the city is still half burned down. Also, let’s not forget all the man-eating plants that escaped and the thousands of mutants that breached the city wall.

This is going to sound weird to you guys. Really, really weird. So there’s this guy in the JD universe named Marlon Shakespeare (ugh, I know, I know) who’s just an ordinary, teenage citizen of Mega-City One until one day, teenage angst sets in. Sick of being just another schmuck, Marlon decides he wants to do something with his life; he’s sick of the monotony and longs to become famous.

So, like, he um… decides to be a graffiti artist, right? Except this is the future so it’s not called graffiti, it’s called “scrawling” and there’s this shit called “scrawling wars” which pits one scrawler against another in an epic scrawler battle (no, no one dies, they just challenge each other to publicly vandalize important objects and go for bigger and more ambitious scrawls).

So Marlon, who at this point changed his name to Chopper, becomes known as King Scrawler and everyone is fucking pissed because he got into a scrawling war with this robot guy, and then we have to learn a lesson about “are we all robots, just trying to overcome the monotony of life” and it’s just so fucking weird. Oh, and Judge Dredd arrests him because he’s painting shitty graffiti all over the city/historic monuments.

FAST FOWARD A FULL JAIL SENTENCE: Chopper is out of jail now, and suddenly this lunatic on a flying surfboard starts causing all kinds of shit for the Judges of Mega-City One. They call him The Midnight Surfer and he’s the God damn craziest, daring surfer fucking. EVER. They can’t believe their eyes, this mother fucker is absolutely nuts. He flies too close to the ground, he flies into the flow of traffic, between buildings, all the while evading Judges, who just want this madness to end.

So naturally there’s a highly illegal contest for sky-surfing (called Supersurf 7, which I have to admit is a pretty badass name for anything, let alone an illegal surfing competition), Chopper (The Midnight Surfer) enters it, everyone else in the race dies because it’s so dangerous and deadly, he tries to save a few lives, fails, wins the contest to the approval of the citizens of Mega-City One, and then he gets arrested again…

FAST FOWARD SEVERAL YEARS: the now legal Supersurf 10 is about to be under way in Australia (of course) and Chopper escapes from jail so he can participate. Dredd is pissed, but there’s not much he can do because the public fucking loves Chopper at this point, so *shrugs* whatever, y’all. I don’t really remember much about this storyline, except there’s a prick named Jug McKenzie that becomes Chopper’s new surfing rival, and the “barren desert” in Australia is known as the Radback (the Radioactive Outback) and that fucking rules.

Basically, the entire Chopper storyline is about this random guy trying to become well known by breaking the law, becoming well known, getting arrested by Dredd, getting out of jail, becoming a surfing legend/breaking the law, going back to jail and becoming twice as popular as before, and finally Judge Dredd just fucking gives up. There’s a scene where Dredd tells Chopper he’s going to kill him -he pulls out his gun and everything- but in the end just can’t do it because he respects this weirdo too much.

1.) Judge Dredd vs The Dark Judges

Ok, this is actually pretty cool. In the Judge Dredd universe, there’s a parallel dimension that’s also full of judges. There are four judges in particular, known as the Dark Judges, who deemed that all crime is committed by the living, so by that line of thinking, all life is a crime. So they fucking kill EVERYONE.

Seriously, their theory makes so much sense to them that they go crazy and kill as many people as they can, seemingly for no reason (they once sentenced an entire school to death because of “noise pollution”). The group is led by Judge Death, the guy behind the entire “life is a crime” idea, and the other three judges (Judge Fire, Judge Fear, Judge Mortis) are pretty much devoted to him and his crazy plots and schemes.

So Death meets these two sisters (Phobia and Nausea), a pair of supernatural mass murders who teach Death all about… mass murdering. They eventually become undead (the hypocrisy of a living person killing other living people for the crime of being alive is no longer a plot hole) and, with the help of the other three judges, kill off their entire planet. Time travelers visit their planet and get killed by the judges (who saw that coming?), who then use their time travel technology to visit Mega-City One and dispense some crazy-person justice to anybody they can get their hands on. 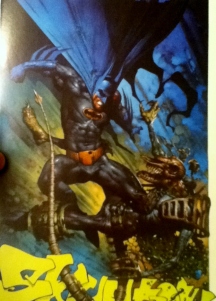 Thus begins the on-going (yes, on-going as in these guys first appeared in 1981 and are STILL being written into JD stories today) Dark Judges storyline, which is a weird, never-ending repetition of Dredd capturing Judge Death and his cronies, them escaping impossible situation through supernatural means, and then the process starts over again. 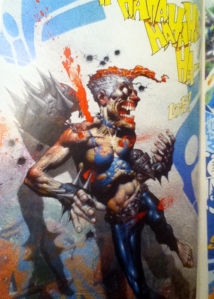 Probably my favorite storyline in the Judge Dredd/Dark Judges saga was when The Joker managed to transport his way to Mega-City One and team up with the evil lawmen. Dredd had to enlist the help of Gotham’s favorite son, but by the time Batman arrived, the body count was already in the thousands- the Dark Judges and Joker seriously fucked shit up. It was a great two issue story, building itself around the story of the creation of a locked “hedonist” cell (think BioDome but everyone is inside fucking/doing drugs/drinking… think BioDome) in Mega-City One. All the perverts get locked in a giant dome with the Dark Judges, who pretty much just cut their way through the population.

Also, The Joker’s “special supernatural power” was the ability to kill people with his laugh. There are three or four panels in this series where people’s heads explode because this prick is laughing his ass off.

Like this article? Fucking hate it? Let Mike know in the comments section!