Pick of the Week

Posted on September 17, 2012 by omaraeverytime

This weeks Pick of the Week section comes from @HeyItsKamo and @OMara_Mike.

Comic Book – Desolation Jones is, essentially, a story about a man looking for lost Hitler 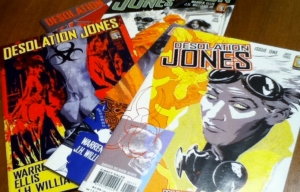 The story follows Jones, a former British Intelligence/MI6 agent, as he tracks down a wealthy mans lost treasure- pornographic films that feature Adolf Hitler. Jones, who lives and works in Los Angeles (in this world, LA/California is basically a giant open-air prison, full of ex-agents from military and intelligence organizations from around the world- they are forbidden from leaving the Golden State) is joined by a bizarre assembly of fucked up ex-intelligence agents that help (or hinder) him with his mission.

Jones is the survivor of a secret military project, known as the Desolation Test. After being discharged from his position (basically for being a huge drunk), he unknowingly signed up for an experiment where he was strapped to a table and kept awake for one full year. During this time, he was pumped full of drugs and subjected to a constant video feed showing nothing but scenes of death. He’s the only known survivor of the test, but that isn’t necessarily a good thing. He is now drug dependent, subject to random hallucinations, and must avoid contact with direct sunlight at all costs- when he ventures outside, he wears a trench coat, goggles, and a gas mask.

The writing and story in this series is great, but what really appealed to me were the

fantastic panels- while the subject matter and story is dark (but surprisingly funny for the most part), the colors and overall art reflect that in spades. There is a definite gloom to everything, but certain quirks throughout pop out in eye catching fashion- Jones’ bright orange trench coat makes him the center of attention in most panels. The deep red of blood controls certain scenes, while others I can only describe as “blue”. It’s pretty amazing stuff and a series I can pick up and enjoy over and over again.

Game – The standard social protocol of answering someone’s, “Name Your Favorite (insert type of media)” question has always been something that I have never been good at, only because there are so many movies that I adore, for many different reasons.  There are countless albums that I have been listening to since I was 12, and still think they’re amazing.  But when it comes to games, there is one that holds strong at my top spot.  That game is Red Dead Redemption.

For a long time I have been a huge Rockstar fanboy.  Hell, GTA3 was the reason I bought a PlayStation 2- I’ve run down my fair share of hookers in Liberty City. I “Bullet-timed” my way through the underground of New York with Max Payne. I was watched on CCTV, while committing gruesome acts of violence in Manhunt. I also called Bullworth Academy my alma mater, after my “year” with Bully. There are many more Rockstar games that I have played, but Red Dead Redemption just got it right.

If you couldn’t tell by the title, this is a story of revenge. John Marston has been granted amnesty against the crimes he committed while being an outlaw. The catch is that he has to kill his former gang’s leader, Bill Williamson, in order to be set free of his crimes. Marston makes his way to Williamson’s stronghold, only to get shot and left for dead.  From here, John starts countless missions, slowly making his way to Williamson and to his inevitable defeat.

Outlaws To The End

As I stated before, I have spent plenty of time in Liberty City while playing GTA4. This city is huge and does a great job making you feel the claustrophobia and craziness of a modern day metropolis. But, there is nothing like riding your horse though the desert landscape, stopping on top of a hill and just looking out at this unbelievable environment that has been created. The attention to detail is something that you could spend hours on, just looking around and taking it all in. To add to this, they really made the lands of New Austin, West Elizabeth, and Nuevo Paraiso come alive.

Boy howdy, I think I’ll hop off my trusty steed and pick those lovely Wooly Blue Curls. I reckon Bonnie will really HOLY FUCKING SHIT A COUGAR IS BITING MY FACE OFF!!!c/o amolag.com

I was initially going to wrap this up by spoiling the ending. But I realized, that epic ending is a big reason why I love this game so much. I will say that it takes you by surprise and redemption really does come to Marston.

So, in the very small chance that you never picked this game up, I hope you are already in your car and on your way to anywhere but Best Buy (fuck that place) to purchase this game. Be sure to get the “Game of the Year” edition, so you can partake in a completely different adventure with John while a zombie outbreak plagues the land.

I have barely scratched the surface of this immense game. But I really do think it is a better experience if you go in completely blind and have the world open up to you, as you realizes the countless things you can see and do.

Television Show – HO-LEE FUCK, y’all! I was in my parents basement a few weeks back, searching through old boxes they stacked in a corner, and found a real gem. On top of all the awesome old toys of mine that I stumbled upon (Zbots, anyone?), I found a box completely full with old VHS tapes. And as I made my way to the bottom of the box-o-nostalgia, I came across a six-series VHS set of…

Please tell me you watched this show as a kid! The back of the box pretty much sums up everything you need to know: The Name in Laughter from the Hereafter is back – as the latest cartoon star of Saturday morning TV. Beetlejuice, the far-out, zoned-out, all-out Ghost with the Most comes hauntingly home in more all-new, fully-animated spookfests inspired by the Academy-Award-winning smash-hit movie and supervied by the film’s director, Tim Burton.

That’s fucking right- from 1989-1992, we had a Beetlejuice cartoon series. And guess what? It fucking ruled. Tim Burton actually developed and executive-produced the series, which aired on CBS and FOX, while Danny Elfman (Batman, Mars Attacks!, The Nightmare Before Christmas) provided one of his original, bizarre songs for the opening theme.

The series was loosely based on the movie, following super-goth Lydia Deetz and her friend Beetlejuice as they explored our favorite ghosts universe, The Netherworld. The Netherworld is a fucked up place filled with ghosts and monsters and zombies and ghouls and skeletons and fucking any weird shit Tim Burton could think of, where anything can happen. Looking back, this show is pretty damn creepy.

The art, music, and voice acting on this show is pretty awesome, and the story of each episode is funny and, like I mentioned earlier, surprisingly creepy. It’s incredible to look back at the stuff we’re were allowed to watch as kids…